In a divination my niece Annie and I carried out to learn more about our family’s Strega lineage, we were told that Oscan is the language of our lineage. After, we did some research and discovered that Oscan was indeed the language of parts of the Abruzzo in ancient times. We began to explore this Oscan connection. Oscan is an extinct language that was spoken in South and Central Italy from the 6th century B.C.E., until the 1st century C.E.  It predated the Roman takeover and was also eliminated by it.

With the help of Massimiliamo Palmesano, a practitioner of the Janara cultum in Campania who is conducting research on the Mother Goddess of Campania and other places in Italy, I learned that the root of the word Oscan is snake and that snake worship is part of the tradition of the Osci people.

This is very important to me since my trajectory back to my own lineage has been long and winding and began with the Snake Goddess. In the beginning, my focus was on the Snake Goddess of the Minoan tradition. Through that lens, I explored and came to know this fabulous force. The life force of the cosmos, the cosmic snake. This image permeates the cultures of Old Europe spanning the Paleolithic through the Bronze Age. 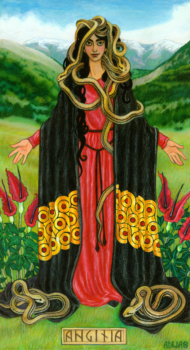 I found the Italian connection to snake worship once before in the discovery of the Goddess Anagitia: a Snake Goddess from the Abruzzo, yet I was not able to get confirmation until I met Palmesano, an Italian Janara currently working with the craft. With Palmesano’s help, I now have the important confirmation that the roots of the Strega lineage that I inherited through my Italian bloodline stretches back to the Oscan peoples and has at its foundation the worship of the Snake Goddess. He has also helped me understand the connection of my Strega lineage to the Janara Cult.

In a personal communication, Palmesano writes: “We worship the Janara cult. Janara (s.) or Janare (pl.) are southern shamans and healers. Most people consider their origin in Benevento and the origin of the name from the Goddess Diana > Dianares (priestess of Diana)….but there are some problems. The Janara cult is not only in the Benevento area, but expanded itself in 4/5 Italian regions in the south (Campania, Lazio, Puglia, Molise and Abbruzzo). I prefer to call it Janara Nation.”

Palmesano goes on to state that the female practitioners of the craft “aren’t priestesses, they are more akin to a shaman, and the Goddess Diana is a filiation of an archaic mother called Jana. On the term Jana, I’ve done a study that says that the origin of the term is Sanskrit and means “knowledge.” So the Janare did not originate in the middle ages, as a lot of anthropologists say, but in the archaic era, before the Roman domination of Southern Italy. The cult has its roots in Osco/Samnites spirituality. The term Osco or Osci (the ancient inhabitants of this land) came from the Greek word “ophis” which means snake. All the archaic symbolism leads to the snake: in a burial of 120 warriors there are no symbols, only a great snake on the shields.”

Palmesano also informs us that the true word for a practitioner of our lineage is Janara; that the terms Strega(s.f), Streghe(pl. both male and female) and Stregone (s.m.) which translate to witch, witches and sorcerer in Italian, were applied to the practitioners of the craft during the Inquisition. The actual word for the lineage is Janara–pronounced Ya-nara. I had seen this word before in previous research from Raven Grimassi who names three cults: Janarra, Tanarra and Fanarra, as the three branches of the ancient Italian craft, but I had never been able to find a connection I felt strong enough about to assure me that one of them is indeed the root of my particular Italian lineage. Now I feel confident that the Janara is.

My great-grandmother called herself a Strega and all my relatives remembered her as a Strega and so this information was confusing at first, but what Palmesano says makes sense. If it was used as a derogatory word in the Inquisition and it stuck, then that explains why it is difficult to find information about the Strega tradition previous to that event. I will continue to use the word Strega to define myself because that is how my great-grandmother identified herself and that is the information many Italian-Americans have about their ancestors. But now I feel assured I have found the deeper roots of the Strega lineage in my family and I am beginning to uncover more and more.

Annie and I will be writing more about our discoveries here, on Strega Tree, as there are many people who have reached out to me over the years about their own lost Strega lineages who may be interested in the information we are discovering.

For this post, the big information is that our Strega Lineage, the lineage of our family from the Abruzzo, has its roots in the Oscan people and the Snake Goddess is a big part of that tradition and that the deeper roots of the traditions are to be found in the “Janara Nation.” 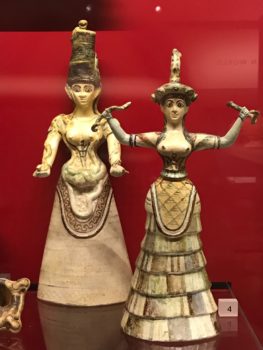 Those wanting to learn more about the Snake Goddess may consider reading my novels, Ode to Minoa and Stories They Told Me. Oscan has its roots in Greek and the Greeks have their roots in the Minoans so there is a direct line here, which I have been following all along but did not understand until now. I suspect the Minoans have their roots in North and West Africa which makes the trajectory of my journey back to my own Italian lineage more and more interesting.