While in altered states of consciousness the priestesses had foreseen a dark oppressive paradigm that would become a stronger presence in their world — an energy that thrived on hierarchy, always sorting and classifying things and people as “better” or “worse.” This force thrived on the masses being easily manipulated by fear. The impending shift carried a pattern of demonizing and exploiting Nature and the feminine that would seek to sever people’s personal connection to Source, forcing them to funnel into institutions for their spiritual rations. These priestesses saw the advance of patriarchy and attempted to protect their elemental allies by silencing them and hiding them away.

Unfortunately, when you’re a medicine person if you silence your allies, spirit guides, and elemental friends, you eventually lose your own voice as well. This does not mean that you can no longer physically speak, but instead it is a slow erosion of the articulation of your personal power. When your allies no longer speak to you, first you lose your oracular voice. But the silence then bleeds into you no longer being able to assert your sovereignty and agency. Eventually, it becomes harder to enforce boundaries and “no” disappears from your vocabulary until the only voice left is the one that says “yes.”

These same priestesses who muted their elemental companions eventually lost their own voice. As this silence was enforced in each successive generation of medicine people it became so deeply ingrained into their being that finally generations were born who did not know they ever had a voice to begin with.

A part of my medicine path has been to facilitate conversations with my elemental friends – which I do literally in my voice divinations when I allow my Kontomble to use my physical voice to speak directly with those who seek their counsel. However, an unexpected by product of me encouraging the Kontomble and Wedeme to speak has been that I am recovering my ability to state my truth and assert my personal authority.

In addition, the silent specters of my priestess ancestresses are also beginning to speak again. My medicine work converges with my academic work, and through the vehicle of my dissertation, which is about the spiritual technology that was used by the priestesses at the Delphic Oracle, I am writing back into history the legacy of these silenced women. I am jumping timelines and crossing dimensions to regenerate the articulation of the elemental beings, the priestesses of the past, and myself in the present.

It is a popular aphorism to “listen to the still small voice inside,” but what I was surprised to learn is that when you consistently ignore that voice and intentionally suppress it, not only does it no longer speak to you, but also, your ability to speak your truth and express yourself starts to diminish.

The agency of our allies, whoever they may be for you, is deeply intertwined with our own. By supporting them we support each other and ourselves. We live in a deeply interrelational world – we cannot tug on one strand of a web without sending reverberations throughout the whole. There is no way we can hurt another and not suffer the consequences ourselves. Similarly, when we offer reconciliation and healing to our spirit allies, we will also be revivified. These allies may be elemental beings, angels, animal totems, star beings, ancestors, or any other entity you work with. Our world is struggling in crisis and pain and there are wise and loving beings who are desperate to help us and teach us how to alleviate our suffering, but we need to listen. We need to give them permission to speak to us again and we need to raise our own voice in concert with theirs to share the healing they long to gift us.

It is time to restore the voice of the elemental beings, of Gaia, and of ourselves. What does your voice have to say?

* I correlate the ancient Greek daimones with the African Konbtomble and Wedeme whom I currently work with. 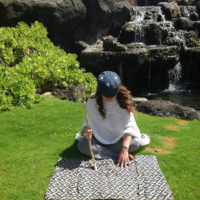 About the Author: Vivien

Kimberly was born and raised in the San Francisco Bay Area and is an active diviner trained in the Dagara tradition. She is currently working on her Ph.D. in Philosophy and Religion, writing her dissertation on the ancient Greek Delphic Oracle. She is a published writer, scholar, speaker, and visionary who is passionate about contributing to the healing of the planet and all beings residing upon it.