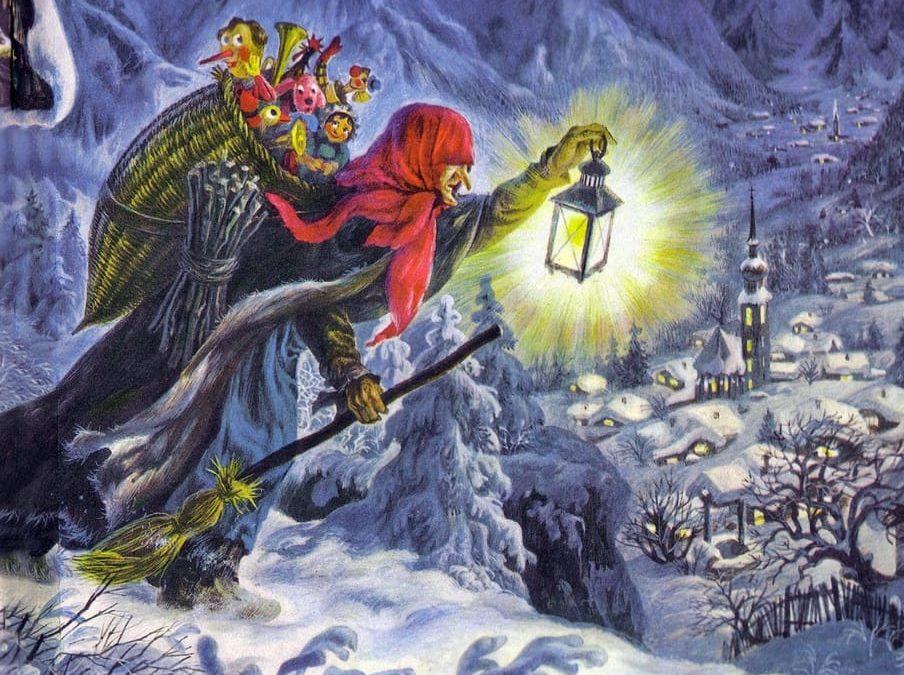 Many people celebrate the Feast of Epiphany each year on January 6th. As I was growing up, my Italian Grandmother never considered Christmas to be over until we arrived at Epiphany which she called “Little Christmas.”

She would give small, traditional gifts on this day. Because she was actively Catholic, she would pray in that tradition. But I remember Italian candies, tangerines and nuts coming out on that day. Candles were lit to the names of little elemental being friends to be remembered.

Catholics see the Epiphany as the day that the Three Magi arrive to the baby Jesus and offer him gifts of frankincense, gold and myrrh. But in Italy, the celebration among the village folk is a celebration to and in honor of La Befana.

La Befana is the good witch. At night, children hang woolen stockings by the hearth, in anticipation of Befana’s arrival. Keyholes are left free of their customary garlic and no brooms are set behind doors, the usual ways to keep the witches away. The witch is welcome to enter on this night. If they are good little children, she leaves them biscotti, wooden flutes, toys, and knitted dolls. If their stockings are filled in the morning they know their new year has been blessed.

Sound familiar? A lot like St. Nick. But here it is a woman and a witch. She leaves her gifts of sweetbreads and nuts and wooden toys in their stocking because she is descended from the Goddess of the Fates, the Weaving Goddess who wove everything into creation.  In Italian Witchcraft Raven Grimassi states: “The stockings hung for Befana on the hearth are derived from ancient offerings to the goddess of Fate and Time. For such goddesses have always been associated with weaving, the loom, the spindle, and distaff (of which the stockings are totems)” (291).

Villages create a large wooden Befana float for the festival which men carry through the streets in celebration. La Befana, a wooden effigy sits, legs forward, on the float, her womb stuffed with mouth-watering treats. To the magical, beneficent Befana they make their offerings and wishes.

As the parade winds its way through town, the procession sings holiday songs outside the more elegant homes and palaces. Their voices rise louder, their instruments more persistent, until the occupants of these fine homes acknowledge and receive them. In return for their songs, the children are given sweet goodies and the adults are awarded shots of brandy. After traveling the streets of the town, the procession, laughing and singing, continues to the top of the hill.

Once they reach the summit, the crowd gathers around La Befana admiring her cloth dress made from tattered rags, her wooden face surrounded by a cloth handkerchief, holding back hair made of dried cornhusks. One of the elder women of the village puts her hands between her legs to the cheers and hooting of the crowd. She reaches in to her fertile, full womb and pulls out handfuls of chestnuts, apples and dried figs. Then to louder cheering and hooting, the coveted Befana sweetbreads are passed around and enjoyed by all. 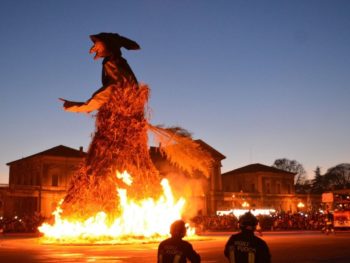 When she is well emptied, they thank her with offerings and gifts, most popular is braided wheat breads. There are also miniature Befanas to offer, paper and wooden stars and moons, garlands of sage, barley, ivy and rosemary. As they present these to La Befana, wrapping her in layers of garland, they make wishes for the coming year. Then firewood is stacked under her, deep within her, so that when lit, La Befana explodes into tall, leaping, energetic flames.

The Befana comes by night

With her shoes all broken

With a dress in Roman style

Up, up with the Befana!

She brings ashes and coal

To the nice, good children

She brings candies and many gifts.

The epiphany bonfires are seen from hilltop to hilltop across the still active Befana worshipping areas in Italy. Upon this epiphanic bonfire, people carry out pyromancy—a kind of fire divination in which they ask the soothsaying crone a question about the coming year. According to the way their piece of olive wood burns, they receive their answer—a fast burn means no, a slow burn means yes.

May La Befana Bless you all with a good year. 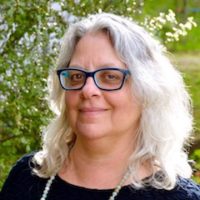 Theresa C. Dintino is an ancestral Strega (Italian wise woman), Earth worker, and initiated diviner in the West African Dagara tradition. For more than 20 years Theresa has studied and practiced an Earth-based spirituality. She currently helps others reclaim their personal lineages through her divination work. Theresa is the author of eight books which include her Tree Medicine Trilogy. Learn more about her books here. Theresa and her sister, Maria are also the creators of Nasty Women Writers, a website celebrating and giving voice to powerful women of all times and places.