The Myth of Narcissus Decoded 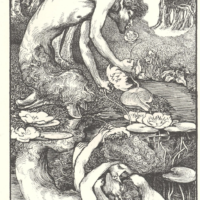 One day while asking the river what offerings I could leave for her, a pair of playful otters surfaced.  I watched their splashing and listened to their chatter for quite some time.  The story that they shared with me was quite a different tale of Narcissus when he gazed into the river than the one we are familiar with.

A young hunter was quite caught up in his own affairs.  He had the hearts of many but never offered much in return.  His ego was inflated due to his good looks and obvious talents.  His arrogance drew the attention of Nemesis. (Nemesis was the daughter of Oceanus, the mighty river, Ocean God that encircled the Earth in the Greek and Roman tradition.  She is the winged balancer of god who wore a crown of stag horns and carried a dagger.  I mention this because it helps me to understand her role in the hierarchy of entities.  She is an agent of Justice and brings retribution to maintain balance in human affairs.)

Nemesis chooses to test Narcissus’ integrity.  She sends the deer to draw him towards a pool of water at the river’s edge. Upon peering in he, at first, finds his own reflection.  Nemesis watches to see if there is any depth to his character beneath his vanity.  He sees his own beauty and spends some time assessing his features.  Eventually his attention is drawn deeper into the water.  It is as if his reflection has taken on a life of its own.

He allows his vision to draw back as if in a daze to see what else might appear.  As he does this, a voice arises within him, almost as if it is being spoken by the water itself.  There is an immediate recognition within himself that he has found a doorway to another realm.  As if this doorway is somehow through his own heart.  Somewhere beneath the surface of the water he has rediscovered his Kontomble, his personal water ally.  It feels like a fairy and  wants to play.  He hears her speaking, often in puns and  giggles to himself as he looks past his reflection in the water.

Day slips into night and Narcissus can’t imagine how he has lost track of time.  It is as if time no longer exists while he is in conversation with his kontomble.  It is as if they have known each other forever.  Narcissus decides to create a nest from the dried grasses at the edge of the forest so that he won’t have to travel the distance home.

As morning arrives, he once again approaches the water’s edge to search for his kontomble.  His heart sinks because he is unable to see anything beneath the surface.  His own image, that he used to love to look upon, barely catches his eye.  He attempts again to allow his vision to soften.  He speaks first with his voice, and then with his heart.  “Where are you?  Is there anything that you need?”

This question creates a tugging sensation.  He hears ringing in his ears and remembers the cup of meade and the crust of bread from the previous day’s lunch.  He picks a few of the blue forget me nots and lays them in a small circle.  He sets the bread in its interior and pours some of the spirits onto the bread.  And then he sits back on his heels to listen again.  He hears, but really almost feels the words: “Thank you.”

His mind scans the endless list of times that he never chose to ask what was needed in the moment.  He sees himself neglecting to make offerings to others and he shudders.  Somehow, Narcissus never thought to give anything of himself.  He peers back into the water and as he is looking, a drop hits the water and disturbs the surface in outward spreading concentric circles. He realizes that he is crying.  Tears start to flow down his cheeks with the realization of his self-admiration.

As his image reappears, a knowing surfaces that the kontomble is here again.  The voice speaks, “I am, and always have been here with you.  You just never thought to ask for me.”

Narcissus ponders.  Could this be true?  And again an image fills his mind.  He is walking through the streets, surrounded by people, passing beautiful tapestries in the market, and stalls of flowers, young children playing and none of it draws his eye.  There seems to be a cloud hovering around his head.  Somehow his self-importance had dulled his senses.

He glances around himself and notices the vibrancy of the colors and the scents of the dew on the grass and the feel of the breeze on his skin.  He takes a deep breath, choosing to remember this moment, this awareness of how small he is in the big picture.

Narcissus internally asks, “Are you here?” And he senses again his ear ringing and a knowing of yes felt in his belly.  Narcissus sends a telepathic hug to the water.  “Thank you.”

He feels closer to the idea of spirit than he has ever imagined.  He slowly packs up his few belongings and sings as he does so.  Plucking the words from the air around him, serenading the birds, and the trees with his tune. As he walks out of the woods he has a skip in his step.  The Narcissus that wandered to the water’s edge the day before got swept away by the current, washed downstream never to be seen again.

Nemesis steps out from behind a tree across the stream in the woods. She glances at the water’s surface and runs her dagger through the reflection.  Kontomble is heard giggling over the bubbling of the creek and she bows her head. Narcissus had passed the test.

Sarah Wieland tries to put the tales and messages that come through in divination into words to share with others to help rebuild their relationships with their own guides.  As a new mom, she is particularly interested in ways to keep children connected so that they never have to shut down their own intuition.  She believes that remaining tuned in allows each individual to live a balanced and vibrant life following their own personal path.