The Surprise Gift in Becoming a Diviner 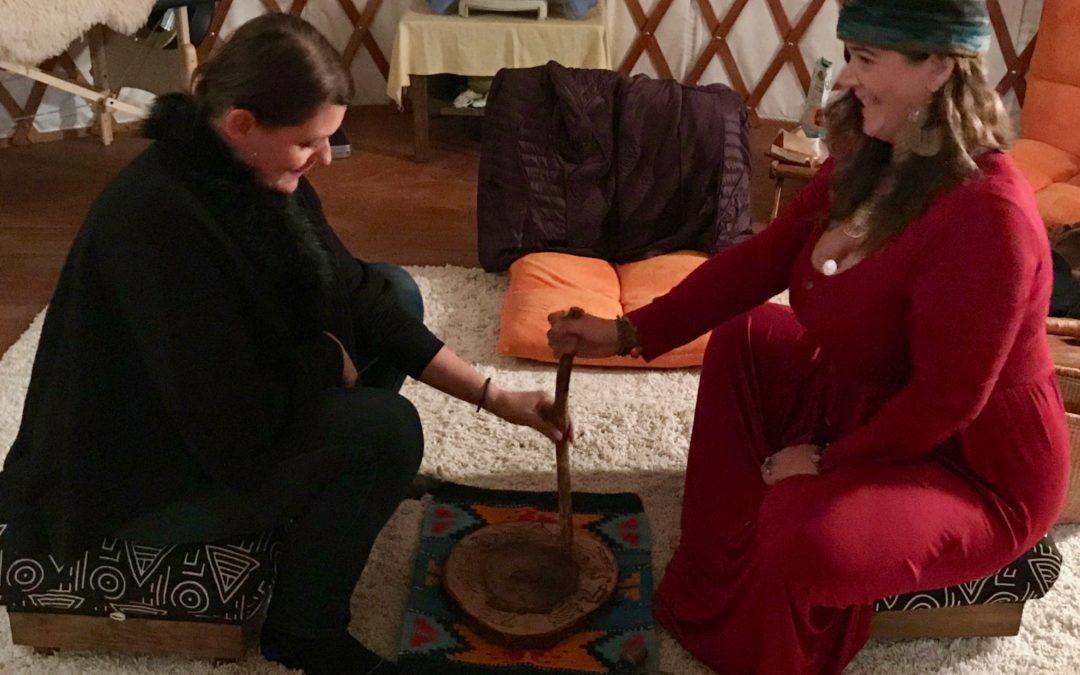 When I was asked to become a diviner, I had no idea what that meant. There was no context for it in my world. Could I even do it? Would there be anything to say? Who would come for divination? As if I wasn’t weird enough already, I would now have to wear a hat, sit on a short stool, and hold a stick for and in front of OTHERS! All my years of carefully crafted hiding out in a room of my own as a writer were about to end. It was terrifying.

As I continued my journey toward becoming a diviner, I became more comfortable. I saw the healing this art form offered and felt if I could serve in this way, I would be honored to do so. When I told friends and family about becoming a diviner, they were curious and supportive. And though I was, they were not at all surprised. (I hadn’t been hiding out as well as I had imagined.) They wanted a divination from me and anxiously anticipated when this could happen.

A context began to be created in my life by me telling people, and by their own curiosity and interest. I felt there was nothing to hide, and wanted to explore this gift I was being delivered with and through others in my community. Together we would figure out why this wanted to be here in this Time and place. It began to feel fun, like an adventure. Things shifted and I was able to view it as a way to serve, and to offer healing and adventure to friends and family.

All of this helped me visualize myself as a diviner, holding this place in my community, and so I readied myself for this as I was led to the Time of my initiation. But what I did not expect or even know to expect and prepare myself for, was the alive world I encountered on the other side of the stick after I was initiated. I had always seen things and heard things and intuited things, but I had never learned how to consciously interact with this material in a real-Time format. Also I had always only seen and heard who was with me, who I had called in with my inquiries. Now I was able to see and interact with entities, spirits and ancestors who were with and around the people who came for divination.

Everyone who came for a divination had different entities around them who were longing for and offering interactive relationship with them. I was able to see many more worlds, realities, lineages and belief systems. There, on the other side of the stick, around the client, was an alive world wanting to be inhabited and interacted with as much as the 3D one. This was a surprise to me. It in fact, was not at all my imagination. It never had been. And even more surprising, there was no formula here. It was all dependent on who showed up for divination, who was with them, and what they said.This was fascinating to me.

And then the wedeme! The beloved wedeme (elemental beings of the wild), with their witty humor, their tiny, caring hands, and deep love for humans and the Earth. Every divination, they came when I called them (they actually showed up!) and we worked together, collaborating on what they saw, how they could communicate that to me, and how I could communicate that to the client, all in the most giving and unselfish interests of healing. This I did not know to expect this either. I did not expect to fall in love with the wedeme so deeply. My great-grandmother returned me to the Trees, and the West African Dagara tradition returned the elemental beings, the wedeme, to me. I am forever grateful.

nobody, not even the rain, has such small hands.

The above is excerpted from my book The Amazon Pattern: A Message from Ancient Women Diviners of Trees and Time

Our newest Apothecary items, the Wedeme Heart Blends, inspired me to post this excerpt to share more about the wedeme and how much they care for our hearts.