WHO ARE THE ELEMENTAL BEINGS? 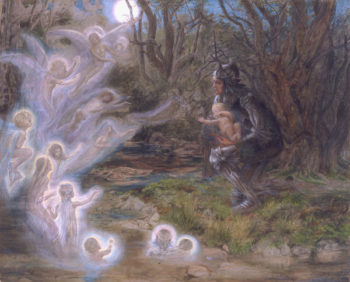 The elemental beings we work with are called the Wedeme and Kontomble.

The Kontomble are the water spirits.

The Wedeme are the spirits of the land and wild.

To be clear, what we mean by “elemental beings” is the fairies, the elves, the gnomes, the dwarves, the wee folk, the fae, the wild ones, the plant spirits, the water sprites, and spirits and the mermaids.

These spirits do not only exist in etheric form, they have an embodied form on Earth as well. They exist in a different dimension than we do, and have access to other dimensions, but they are Earth beings, just like us. 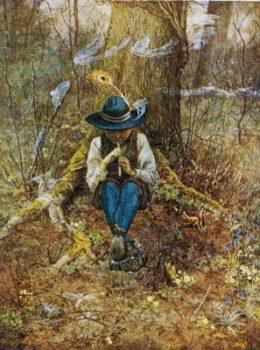 Piper of Dreams by Estella Canziani

In our experience, the elemental beings are the most loving beings in the cosmos. They have an unsurpassable commitment and dedication to the humans and the Earth. They have enormous compassion for human suffering in spite of our neglect of them and the Earth. If we truly want to get out of our heads and back into our hearts, as many of us say we do, the elemental beings can teach us how.

Many of them were with us as children until we sent them away. They are waiting for us to remember them and reengage with them. This preservation of the “merge” with these beings in order to become a diviner in the West African Dagara tradition is precious and rare. I believe it once existed in all shamanic traditions, and this relationship was disconnected in the great, worldwide persecutions of the medicine people. This is a potent bond waiting to be reawakened. And it is they, the Kontomble and Wedeme, who have been holding this for us—waiting for us to awaken to them once again.

If one calls to you to reunite with them, know this is one of the greatest gifts you can ever receive. Say yes.

© Theresa C. Dintino, 2016. Excerpted from The Amazon Pattern: A Message from Ancient Women Diviners of Trees and Time.